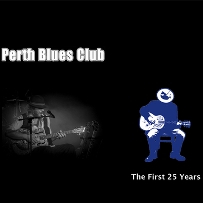 We are delighted to announce that a coffee table style book has been produced to celebrate the first 25 years of the Perth Blues Club in stunning, high quality photographs. This limited edition book is a collaboration between the Perth Blues Club and our official photographer Allen S Pyrah of asp-photography. While Allen has been taking photographs since 2008, this book also has images of many musicians who have performed at the PBC during its first years. As well as photos of the musicians, you’ll also find photos of some of the club’s ‘characters’ and the volunteers who help it to run smoothly – capturing the atmosphere and vibe that is The Perth Blues Club. The Perth Blues Club, or the PBC as it is fondly known by some, had its fledgling beginnings in the early nineties when Rick Steele, with some musician mates, saw an opportunity for a venue for live blues-orientated music at The Charles Hotel in North Perth. After finding its feet in the front bar with an open mic approach, the club evolved quickly, moving to the back bar, becoming an incorporated not-for-profit organisation in 1992. Here’s what Club President Rick Steele has to say about this outstanding photographic record of the club’s first 25 years:

I am extremely grateful to endorse this wonderful publication. Allen S Pyrah has captured the inside running of our humble club and captured the true essence of our existence in an international professional standing. We may be from the most isolated capital in the world, but these photos show that beating blues hearts can cross oceans.